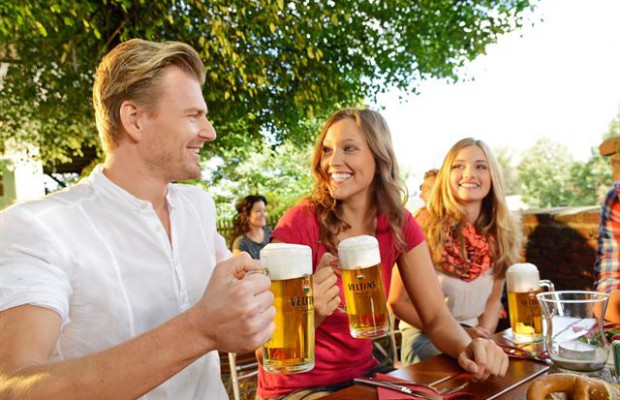 In the beer garden, conviviality is the trump card – tying on hardly plays a role

On warm summer evenings the Germans are magically drawn to the beer garden. The corresponding offer is now very large in all regions and has probably tripled in the last ten years alone. Today, cool drinks can also be enjoyed on the many city beaches and beach bars or in the outdoor restaurants of the city centres – but they cannot replace the ambience of a classic beer garden. But why do Germans like to go to the beer garden so much? This was the question TNS-Emnid asked the Germans on behalf of the C. & A. Veltins brewery.

For exactly half of the respondents, being together with friends is the most important reason why they go to a beer garden on a beautiful summer evening. For 21 percent, food and drink are the decisive reasons for enjoying open-air gastronomy – and only six percent want to meet new people or flirt in the beer garden. “You go to the beer garden for a cosy chat with friends, acquaintances and colleagues – other locations are ‘responsible’ for flirting and flirting,” says Ulrich Biene from Veltins.

The ambience of a beer garden today is increasingly demanding for guests. Awnings or parasols, for example, should protect against excessively hot sunlight. The tables and chairs must also be weatherproof, because they must withstand wind, rain and sunshine. In the evening, visitors to the beer garden can look forward to additional bar tables – they immediately ensure casual communication. When the open space is greened and decorated, a pleasant atmosphere is quickly created. A fountain with splashing water can be a special eye-catcher. “Many landlords develop besides a tapping plant or a bar in the external area, also a grill or a salad bar can be points of attraction in the beer garden , so Ulrich bee.

The “birth hour” of the beer garden

The actual origin of German beer garden culture dates back to the 16th century. In 1539, the Bavarian brewing regulations stipulated that brewing was only permitted between the end of September and the end of April. This gave the brewers an idea: they laid out beer cellars so that the beer produced in March and April could be stored in cool surroundings throughout the summer. Ice blocks from rivers and lakes in the surrounding area cooled the beer, and chestnut and lime trees provided shade. At some point the beer was drunk immediately under the trees. The beer garden was “born” – but the quarrel with the landlords was inevitable, because they feared for their guests.

The “social function” of the beer garden

The fact that the beer garden has its origin in Bavaria can also be seen from the fact that the Bavarian State Government issued its own “Beer Garden Ordinance” in 1999. In it the beer gardens are assigned an “important social function”. They are a “popular meeting place for broad sections of society” and make it possible to overcome social differences. Since the beer gardens are a local recreation destination for the cities in the eyes of the state government, the ordinance defines a number of exceptions with regard to night rest and noise protection.